The term “meme” comes from Richard Dawkins’ book The Selfish Gene, wherein he attempts to take the concepts of evolutionary biology, strains them through the Sapir-Whorf Hypothesis and revels in the result – a rapidly-galloping evolution in human culture that far outstrips our rate of physical evolution. Memetics are in their basest form a viral interaction: the meme is transmitted, internalized, and exported from person to person based on the ease of communication between people. They thus form and reform the baseline thoughts you have about a concept or idea and nudge others in similar directions. The key is simplicity (to make uptake simpler) coupled with vagueness (such that the inferences of the statements at hand can fit into and influence your current pile of baseline thoughts), and boy are those two ideas a bad portent.

That said, Canadian memes are fucking retarded. Because Canadians are notoriously ahistorical and have no meaningful sense of nationhood they are deeply vulnerable to suggestion and make-believe about their leadership and their country. Memes are particularly ready recruits for revisionism because their narrratives are as simple as can be but invite all sorts of unsupported fantasies without a shred of evidence on the part of the viewer. As if looking through a cum-covered kaleidoscope the meme is interpreted in hundreds of exotic, idiotic ways by people with a common revisionist lens and thus becomes hundreds of personal justifications for the same bullshit.

All this is to say that looking at memes surrounding the election of #RealChange showcases the kinds of lunacy that people peddle about this guy. To do this I have moved mountains, by which I mean that I typed “Justin Trudeau meme” into Google and started wading through the intolerable dreck that is #RealDelusion. I looked for precisely no time before I found a series of “feminist memes” created by vox.com; those words should probably come with a Surgeon General’s warning because writing that felt like snuggling up to a radioactive pillow stuffed with asbestos. 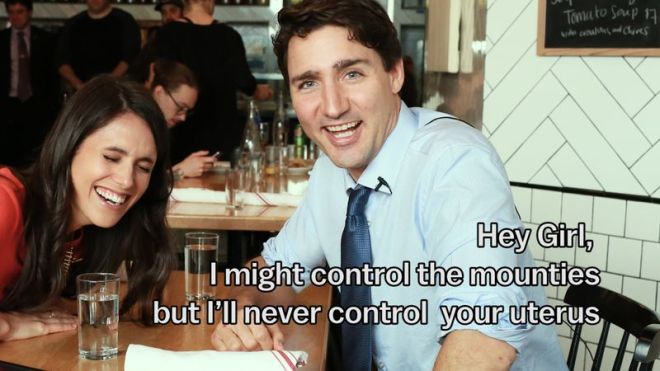 The Prime Minister reminded his MPs he made a pledge to Canadians during the 2011 election: that his government would not reopen the abortion debate and that Conservatives wouldn’t bring forward legislation on the topic.

While Steve was nefariously ensuring that the current order on the subject remains as it was (taking a hefty beating from his base in doing so, suggesting a principled stand on the matter), he also set women decades behind by appointing three fewer women to Cabinet than #RealChange did. That bastard! Thank fuck we’ve got Justin; obviously we’ve entered a new age of gender politics in Ottawa because Harper would never pose for dank feminist memes.

Oh, and one more problem: the Mounties aren’t exactly known for their nu-left cred. How is “controlling” a toxic, misogynistic institution a good thing to counterpoint a feminist message with?

And speaking of Justin’s Cabinet, why is Treasury Board 66% dominated by white males? Even the backups are 60% white dudes. That said, it’s not like Treasury Board is important or anything. It’s only perhaps the most powerful Cabinet committee, with unique authority over spending prioritization. Such trivial powers as:

Are clearly not as important has having a female Heritage Minister from Montreal, which means that the NCC lands in Ottawa are no longer governed by someone who lives in Ottawa. Progress! 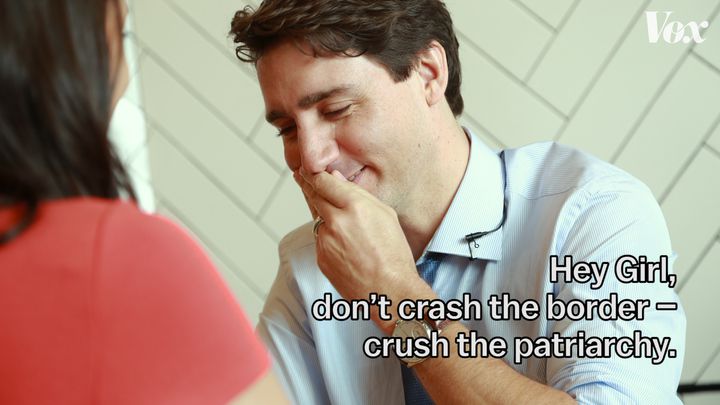 Hey man, don’t think about the 75,000- nearly 100,000 Canadians leading undocumented lives in the United States as of 2008 – pull out the myth of Americans moving to Canada en masse come election time and relate it to the concept of patriarchy for some reason. Nothing about this makes any sense – #RealChange even speaks to the “moving to Canada” myth during the interview. This is an excellent example of memes spouting bullshit and allowing the viewer to draw and re-confirm their own gull-brained mythos about the setting.

And what’s worse is that the text was okayed by someone despite the interview expressly speaking against the phenomenon implied by the meme. At least somebody did – Justin was asked to pose for memes so he had to know what was going on, and Vox presumably would rather not piss off an interview subject with the click-drawing power of #RealChange. From the PMO, the notion that an image-crazy government like #RealChange’s PR handlers wouldn’t consider or think about an interview, particularly one which spawned images intended to be viral, is laughable. So why is it okay for the text of an interview and the spawn of it to say and imply contrary things?

Clearly this is vastly superior to the staid quiet of the Harper government and its brutally repressive regime where little changed in terms of abortion access, LGBT communities continued to enjoy unrestricted access to marriage, and where women made impressive strides in the business world. Fuck that – Harper was an evil misogynist because reasons! Dank feminist memes from the Prime Memeister himself is progress! When all the pretty people tweet all the feminist memes we’ll have super-equality magical fun times! And who better to carry the banner of the marginalized than a straight, wealthy white male and his Board of pasty-pale rich dudes, right?