There are not enough spikey dildoes in the world to punish the creator of this filth. Yeah, Hondurans and Guatemalans getting gang-raped by Barrick Gold’s goons must claim Canada as their “favourite” country. I’m sure the literally billions of people who have no interest in Canada chose it as their favorite based on the nothing they know about it.The Mohawks I wrote about earlier must be falling over themselves adoring this podunk shithole. And the whole time, the basic fact that cakers are irrelevant globally and useless nationally is totally ignored.

This is poison. This is national AIDS. This idea, this constantly-repeated, absolutely stonking horseshit is part of why this country won’t grow up. No, you idiots. You can’t claim that Canada is the country-bumpkin shucks-golly of the international world while your companies and your statecraft abuse thousands for no discernable end save supporting the unthinkably useless and gluttonous Canadian business classes. You have to actually know things when you make that claim, and if you knew anything about Canada you’d know that international opinion starts at “meh” and goes down from there. Nobody gives a shit about your podunk, stinking hole.

Or your fucking nasty beer, for that matter. Gotta love the hashtag at the end there too. #iam.Canadian. #youare.slowinthehead to believe this shit. It’s telling that the multinational owners of this swill factory are the ones telling you that the world loves you – the world loves cakers because they’re easy marks who will fall for any kind of shit with a maple leaf and some red-and-white on it, not out of any positive sentiment. Canadians are too slow and dense to survive the world of today, so the land is hollowed out and the people are fed garbage like this to make them think they matter.

Why do cakers accept this as meaningful or even a useful statement of any kind? Bad beer says Canada matters – therefore, share this shart far and wide! Canada Day when it’s boiled down to image macros is all about products and not a thing about, well, anything else. That’s because there is nothing else to modern English Canadian nationalist sentiments save for consumer goods. Take this brony-themed nonsense:

Washed out actress, irrelevant trophy that was last won in Canada about 20 years ago, stolen cultural artifacts, coffee swill, processed garbage called “food” – yeah, this looks like Canada too. Why are people proud of this garbage? This is like a serial killer making a mask out of his victim’s body parts.

Or this. Look, it’s a shitty, non-functional costume that takes your arms out of commission! Canada seems to take people’s brains out of commission, so I suppose that makes sense in some way. For more fun, listen to these sighs of horror at 0:14 as the Rock sings that Canadians have no class:

Or this, wherein one of Canada’s most annoying animals (seriously – fuck Canada geese) gets stuck with a beaver and some hockey sticks because nobody could think of anything else: 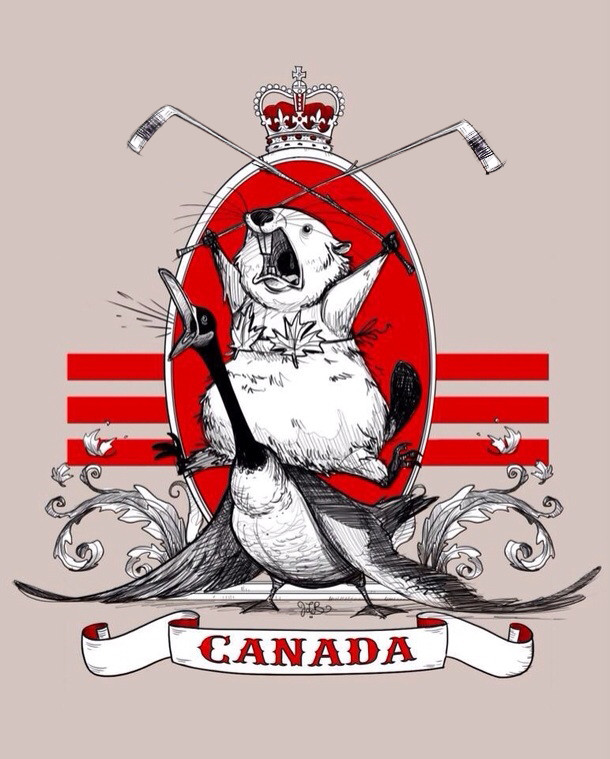 When you try to go unbranded in Canada you end up with tepid plays about beavers and moose and geese, which are in order a nuisance, irrelevant stupid near-blind fucks that try to hump cars, and the aforementioned shit-geese that, well, shit on everything and then hiss at you for daring to want to go to Canada’s horrible, useless, unkempt parks.

One more. This one is both stupid-looking and lifted from the AmeriKKKans.